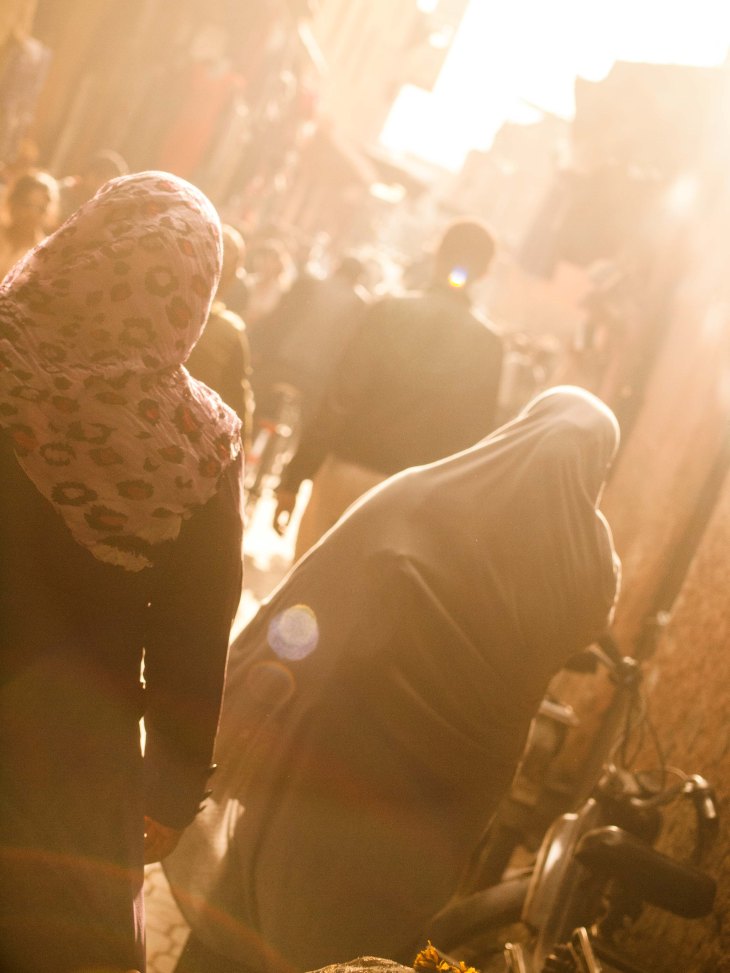 Staying in Morocco for a longer time has some interesting effects on a solitary traveler. Women soon come to appear as either marvels or mirages. This is something that was rather similar to my experiences in the more conservative parts of India.

They are always or almost always veiled, unless you are in a big city. The colours they wear are usually not lacking beauty, but are not attractive in the sense that your eyes are drawn to them. They are like muted flowers, veiled and shrouded. Sometimes the veils and shrouds are remarkable and stunning and sometimes they fuel only your dreams. One can only guess at most women’s physicality and that does heighten the senses for a man (I can already hear the chorus of complaining voices and how I tolerate and even praise a despicable male-dominated culture, but I am simply reporting how it felt to me) and creates a different kind of focus.

We men are easily distracted animals. Parade a beautiful woman in front of us and we forget what we were about to do. Without sexual impulses – of which there are many in daily European life; for example, on the airport in Milan, I held a Playboy magazine with shaking hands, glancing over my shoulder like a nervous schoolboy as I gingerly leafed through it; but even perfume ads are clearly sexual, the women looking as if they are about to melt in a sensuous orgasm brought on by the inestimable delight of that scent, I suppose – without sexual impulses, I mean to say, we focus on other things, we truly do.

In me it brings out a certain poetry. Moments become heightened, there is a feel of male camaraderie and companionship in the air, also a feel that emotions are allowed to run their course and male emotions tend to be more sluggish and slow and much more hesitant to unfold. Things take on a different sense and the more beautiful it is to meet a woman and even share a few words with her.

Women and men, you see, do not walk together and rarely talk together in public. Women are colourful or colourless bundles or beautiful framed eyes or even faces. They are dreams, because unless a man is married or goes to a prostitute, he will not see a naked woman…and few sights are more beautiful to a man (well, to me, I know some men prefer different sights).

Nakedness, however, has degrees. Once I went into a riad to talk to the owners and in front of me was a beautiful young woman who was working there as a maid. She has taken off her veil and it took me some strength not to stop and stare at her. Her hair, the way it framed her face, the ease of her features and the way she held herself. It seemed both secret and alluring to me. Later, after seeing the riad, I came down the stairs and saw a woman with a headscarf. I greeted her and she said, “C’est moi.” The beautiful young maid appeared from her features. It took me a moment to recognize her, as if she had become a different being by putting on her scarf.

So I suppose it may be in some cases. The veil is not always a prison, but sometimes a refuge. Men will consider an unveiled woman fair game, because of the different sensitivities as to what nakedness is. Fair game does not mean rape or molestation, by all means, since we are now in a culture where everything apparently needs to be taken to extremes, but simply an attempt to get together with that woman, subtle or unsubtle. Of course how much that affects each woman differently is unknown to me.

Islamic literature, poetry and even history have an immensely deep sensual side to them. We psychologically trained Westerners have the tendency to say: of course, they sublimate all their suppressed desires, but that is perhaps because we usually allow desires to run rampart in some ways. We feel better with explanations that tear away everything, but in a world where veils are prevalent, the senses are keener. Mysteries are appreciated because they speak to the imagination rather than the intellect.

Live, of course, is more multifacetted than most literature or poetry. It can be traumatic and altering if one has forcibly torn a veil from one’s face. Of course it is also traumatic and altering to be wrapped in something that one does not want around oneself. I wish everyone the patience and clarity to discern which situation is which and become aware what constitutes the veils you like to draw around yourselves, whether you are women or men.

I often think about the ethics of photography, about the lines that should not be crossed (or if, in rebellion against your own feeling of shame, they should be crossed) and about the dignity of your subject.

My own photographs cannot be said to be very striking or insightful, I think. They are in part superficial, momentary, sometimes beautiful and I hope that I manage to portray the dignity of the people I choose to photograph, and their sense of themselves as well as their joy. I do not photograph intellectually and I do not seek out suffering. If there is anything I choose to photograph, then it is the joy and wonder of travelling, of seeing the world, rather than of thinking about it.

Photography, respectable photography, seems to be concerned with suffering. How a person goes through agony, madness, disease and ultimately death or how they take on the cruelty of the world, which does not care about them. Because these, or so the images would suggest, are the cornerstones, the irrefutable realities of our existence against which all other things pale and wither.

Respectable photography, like respectable philosophy, has long dealt with ideas of despair and emptiness, a world devoid of god. It is a strange dogma, this stubborn existentialism, the idea of the purity of hopelessness. I do think that our time demands a more diverse approach, a more open and flexible philosophy, an eye for not only the connectedness of all things but also the contradictory nature of everything.

Suffering is only a part of the truth, if I may use this heavy word.  The world, in my experience, is never clear. There are hundreds of contradictory emotions and impressions floating around at every moment and if one has clarity it is only the clarity of one’s own emotion. Speaking as a photographer, that certainly makes for effective images but they are rarely truthful.

There are no pure, undiluted moments. Not even in despair. You have to look for them and keep all the other moments out, because they might change the mood. I am still looking for the photographer who aims to show glimmers of hope in desperate situations or moments of strange, unsuitable, contradictory emotions.  A photograph freezes the moment and makes it eternal. The man in agony is not in momentary but eternal agony. This, I think, is why I would like to see more contradiction. Because it increases the awareness that moments flow and change.

Having travelled extensively in Asia, I have seen instances of disease, famine, despicable living conditions, depression, gruesome accidents and death. But I would not decide to photograph such moments, unless I would aim to show the human dignity that must be there underneath.

To me it seems as if there is an accepted image of suffering, a representation of it that will reflect upon the photographer and bring him some sort of twisted glory. Prize winning photographs depict unspeakable horrors because unspeakable horrors, especially if presented artistically and resonantly, sell and find an audience.

I find there is a danger in this. It creates expectations and desensitizes the audience as well as the image maker – the next reportage must be more shocking. The photographer becomes a seeker of gruesome images, no longer because they are a reflection of the truth, but because they have become the world in which he is successful. It also strips the subject of the image of dignity. The subject becomes an object of pity and a canvas on which one can project many things, one’s own fear of the primitive side of man first among them all.

But is a beautiful image more truthful? Is beauty truth, as the old adage held? No, of course not, but it is antidote to an ethic and aesthetic of suffering.

If you want to have a truthful image of Asia or of Africa, look at images taken by Asian and African photographers and try to see through their eyes. Look for photographers who have managed to get rid of their own cultural lenses or have understood them insofar as to make them unimportant.

Many of the greatest photographers have taken time to develop an understanding of the person or the situation they want to photograph, along with all the contraditions and complexities. It is as simple as that. My own photographs do not even begin to measure up to such a standard, but I think it is a direction worth taking.