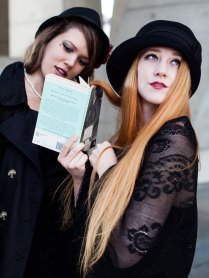 The British countryside, as I watch it through the window of a National Express bus on the M1, offers itself pleasantly, hinting at picturesque scenes further away from the surge of cars: twisted, leafless silhouettes of trees against the sky, which make me long for walks through deep and wild forests. Hundreds of sheep dotted on green pastures, their fur a matted protection against the endless drizzle. Occasional stocky stone buildings, encased by shoulder height walls, speaking silently of bygone times, a right to one’s own land and gruff homeliness against the elements. Inside the bus, even though every seat is occupied, it is silent. An agreeable silence – cell phones are only used during a half hour break – and even the whispered conversations that I have with my companion across the aisle seem to scratch at the threshold of tolerance.

We are headed North. The North as the green signs along the road state, making me believe that it is a separate land that we are headed to; a semi-mystical place of snow and rocks and ice; a place that can never be reached except through those signs, the road leading on past the last bus stop, but without a driver brave or sure enough to ever take you there. Newcastle upon Tyne is our more prosaic stop and the accent of the driver is a sure sign that he certainly is brave enough to take us there.

The language of the North is harsher. Guttural Scotland is closer after all. The people descend from Pictish barbarians and hoary Celts. Geordie is what the dialect is called and it is a dialect that incorporates Anglo Saxon sounds and even admits to a degree of Scandinavian influences. Barbarians, certainly. Newcastle is partly beyond the Wall.

The Wall – now this is the historic hook for my fanciful image of The North. In the 2nd century AD Newcastle was Pons Aelius, a Roman fort and the site of a bridge crossing the river Tyne. It was and is the place where Hadrian’s Wall ends.

Hadrian’s Wall was the idea that took us up here. My friend Pooja thought that we could walk along the wall for a bit. Due to Easter weekend and family obligations we had to modify the plan a little and decided that if we can’t see the wall, at least we can see the wall’s end.

After the gentleness, civility and intellectual pleasures of Oxford, our last stop, I can well imagine how a Roman scribe must have felt, being sent up here to the edge of the civil world. The harsh sounds induce wariness, the faces hold bitterness and pride in equal measure, people aren’t pleased with themselves.

Our introduction to the North is one of its more recent signposts – the Angel of the North; a thirty foot high statue of corrugated iron near the M1 exit to Gateshead. It looks a little like a WWII fighting jet with evangelical aspirations or maybe like some soulful fighting robot out of a Miyazaki story. It is located on a hill, watching over all the knotting lanes of the motorway, and while we drive past, I can see the silhouette of a boy running towards it, barely taller than the Angel’s feet.

Corrugated iron is a proper introduction to the industrial aspect of Newcastle. Next I can see rows and rows of identical looking houses, all of red brickwork. A strange vertigo of identity takes me as I look down a street descending a hill and all I can see to both sides is the same house repeated endlessly. Later a cab driver will tell us that almost every night he has passengers who are so drunk that they don’t know their name or where they live. It must be a peculiar horror to find yourself drunk in such a street where finding your own house can be a challenge even with your senses intact.

Newcastle, once it was properly established first as a castle and fortress (witnessing a number of battles against the Scots), became a coal mining and trading town. Its location on the Tyne river with rich coal seams in the ground below the city made it easy to mine coal and export it to London, making Newcastle a prosperous town. Increased prosperity and success came during the Industrial revolution – Newcastle had turned into a shipbuilding town and the steam turbine and the electric light bulb where first discovered in Newcastle.

The first impression of the town was somewhat sober. Rows upon rows of red brick houses. British uniformity, a feel of factories. The cab driver who took us to our hostel was gruff but friendly. Did we know what people in Newcastle liked to do? They work all week and then they like to have fun. Seeing that Pooja was Indian, he told us about a mate of his who had a farm in Pakistan. He himself would never go there. Why? Because you couldn’t get a drink in Pakistan and what was a holiday worth if you couldn’t get anything to drink.

We ended up staying in one of the poorer part of Newcastle, called Benwell. The hostel was run by a friendly lady from Pakistan and the tenants were staying long term, for the most part. Immigrants from Africa and India, a few travelers, and a number of people I heard but never saw in the huge building. A giant TV screen was dominating the lounge and the reception was filled with wires and computers and a large split screen showing the videos taken by the many surveillance cameras – Britain is the country with the most surveillance cameras and in many cities you can be sure that you are being recorded at almost every moment that you spend on the street or in a shop. Sometimes polite signs mention this very fact to you. The implicit paranoia is a strange thing to consider and lends some places a feeling of unease, but doesn’t intrude on you in any way.

The city centre was overwhelming at first. Much of the city still has its medieval layout so the streets are narrow and connected by twisting lanes. Much of the centre has been developed in the nineteenth century and is filled with neoclassical buildings that occasionally reminded me of the Ringstraße in Vienna. The bustle, though, brings with it more associations of medieval times or the heights of the Industrial revolution. So far that is what surprised me most about England – just how busy and mad the cities seem. People on the street seem to be in a hurry, at all times. Because most gardens are ringed by walls and fences and most buildings show forbidding facades, privacy seems bitterly protected. There are no glimpses through windows to be had, eavesdropping on other people’s conversations avails you with barely any personal details – English private lives are protected by walls much more successful than Hadrian’s Wall. Maybe that is what makes them hurry and maybe that is at the core of all of the pleasantness and politeness.

Back to the city centre of Newcastle – if one imagines different cities as speaking to different senses, Newcastle certainly is a city for the ears. Hawkers prized their wares; newspaper vendors shouted out harsh offers; conversations were loud; a man in a kilt played bagpipe music. Maybe I was simply used to the reading room atmosphere of Oxford, though, which had been our previous stop. The sense of hush that was totally absent now…

These streets could have been filled with smoke and gaslight and neverending noise – as indeed they were not more than hundred years ago. The faces of the people still show some of the grimness that comes with hard manual labour. They evoke distant memories of the time of the Industrial Revolution. Children as young as eight years old had been conscripted to work in the coal mines. Man had stopped working with the cycle of nature and instead tied himself to the unrelenting cycles of the machine. I couldn’t see many smiling face during the first day in Newcastle. But after night fall the city showed a different face. Despite the cold the women had dressed up in tight skirt and often sleeveless shirts. Some teetered so precariously on their high heels that I wondered whether they hadn’t started the night’s tour into oblivion a little early. The men walked together in joyful groups; urbane looking couples appeared out of nowhere. The pubs seemed welcoming and warm and people stood in line in front of night clubs. Taxis and busses and cars raced across the rain-slick streets in a dizziness of original and reflected lights. Newcastle is rightly famous for its night life.

The next day we decided on a more historical approach. A bit away from the centre there is a Roman excavation site. Its name is Segedunum and it was the original settlement that later became Newcastle. The popular name for it is Wallsend, which is also the metro stop that takes you there. Segedunum was a small fort. It had provisions for cavalry and infantry and historical guesses set the number of the garrison at around 600 men. It wasn’t the northernmost outpost of the Roman empire – this honour belongs to the lesser known Antonine Wall, built in Scotland about 20 years after Hadrian’s Wall. The wall joined the fort at the Western side and led down to the river on the other side where it was most likely equipped with some sort of statue that would greet ships coming upriver. There was another fort on the other side of the river and from there the wall led onward to the coast. Nothing is left of the buildings except the outlines of the walls but as soon as I stepped on the grounds I felt myself transported back to the time when the fort was new and filled with men. The adjacent museum with its interactive stations and thorough reconstructions had set the stage perfectly and I knew what I had worn (different layers, different wools), what sort of room I had slept in (right behind the stables, if I were cavalry, otherwise sharing a small room with two cots, water and a small fireplace), what sort of games I played (predecessors of “Paper, Stone, Scissors” and “Checkers”). I imagined myself as a soldier newly garrisoned at Segedunum. I didn’t like my commanding officer and I kept distance to most of the others in my cohort who cared for little else than drink and games of dominance. But there were some friends, men who held the same gods in esteem, men who I could sit with and talk to. I wondered about some of the girls in the outlying village – barbarians, certainly, but pretty as day. I imagined going past the Hospital and praying that I’d never have to feel the hooked and barbed tools of the surgeon (which I had all seen, reconstructed, in the museum – scalpels, tools for eye surgery, skin hooks…). Most likely I wouldn’t have had to fight. Hadrian’s Wall, while obviously an impressive display of military strength, served more than a purely military purpose. The people within the borders of the Roman empire could be called Romans, could be included in a census, could be given passports and could be asked (politely, of course) to pay taxes. Trade goods could be officially taxed and the gates of the wall served as customs offices. Hadrian maintained good relationships to the Northern tribes. Battles and skirmishes happened in 180 and during a time when the garrisons were weakened and the wall had to be rebuilt but were rare otherwise. A village surrounded the fort and the soldiers certainly interacted and maybe even intermarried with the locals. Then Pooja called me back over several centuries and the invisible village sunk once more into the depths of time – she was hungry and we went to a restaurant…